You are here: Home1 / interest 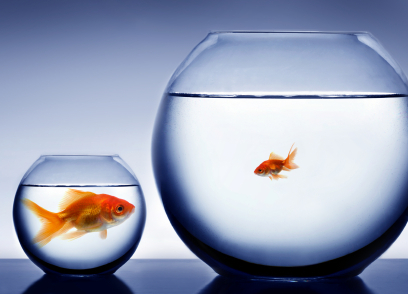 I know, I know – the saying is “think big,” but I am coming to believe that it is the small things that will make the

biggest difference in our lives. I always talk about “5 bucks matters whether it is draining out of your wallet,

paying down your debt or building up your savings,” but I wasn’t really, truly applying that philosophy to all

that you want to be different next year. If you have done that, perhaps you are creating your goals, identifying

your action steps, preparing yourself for success, and identifying challenges to your success. Awesome – keep

preparing. To help you achieve big goals, plan for small actions, take small steps, do little things but do them

I am the queen of the grand gesture. I can easily get excited, make plans, buy equipment, block out hours and do

something grandiose one or two times. Consistency is what is hard for me because I am so quickly caught up in

the next new idea or big plan and it is nearly impossible to maintain the “big bang.” For me to succeed at

something, I have to take turtle steps. I talked about Martha Beck’s turtle steps in part II of Creating Better

Money Stories: A turtle step is an action that is so ridiculously easy as to be laughable. It is such a little nothing of

a thing that it hardly seems like it would matter, but it does! It really, really matters because it helps overcome

Make your action steps be turtle steps so that you know you will do it. It’s so easy, why not? Then come up with

another turtle step for tomorrow. Consistent turtle steps will move you faster and further than thinking that you

are going to “block out 6 hours to tackle this.” Ha! That is never going to happen for so many reasons.

As you make you plan for 2016, identify the turtle steps that can help you creep your way to accomplishing big

goals. In the book, The Compound Effect, Darren Hardy talks about the power of compounding the impact by

doing small things consistently. That compounding can be positive or negative. Take the example of spending

just $4/day on coffee versus saving $4 per day: “The real cost of a four-dollar-a-day coffee habit over 20 years is

after 31 months.2 There are so many examples of little things which when done consistently create massive

impact. The critical part of that is done consistently. What will you do consistently in 2016 that will inch you

“Be faithful in small things because it is in them that your strength lies.”